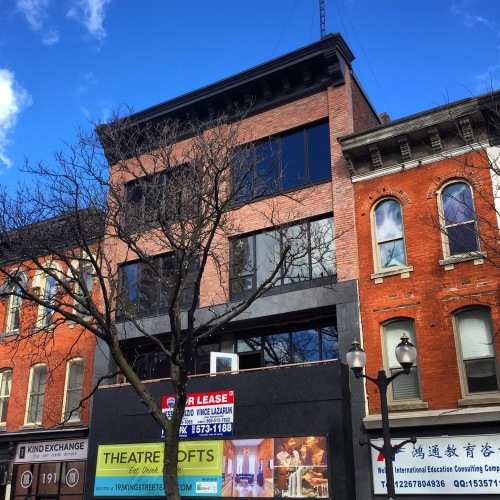 It was a cold, rainy winter day as I entered 189 King Street East through the alleyway. I ascended a narrow corridor of stairs to the top floor and entered a loft that looked like something out of Brooklyn. Greeting me was the smiling face of Peter DeSotto. DeSotto and his partners, Alvaro Valencia and Marvin Grimm, of Urban Map Inc. are in the middle of repurposing the former Sandbar Tavern and I was about to take a tour.

It’s no longer going to be called the Sandbar, though. It’s now Theatre Lofts. And the loft I just entered, next door, is their current office. An open concept space, with an eclectic array of furniture, sleek kitchen, and even a clawfoot tub. After a quick glance of the space, I quickly grasped their vision: open concept, high ceilings, exposed brick. The new recipe for Hamilton’s evolving aesthetic. 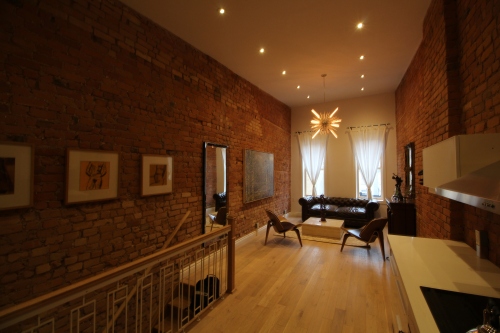 We sat down to talk about the project. I found a seat on a midcentury Wings chair, with DeSotto directly across from me on a beautiful tufted brown leather sofa.

DeSotto is a violinist tenor and founder of the famed Quartetto Gelato who recently moved to Hamilton, but you would never know. His love for this city is palpable. Accompanying us were the realtors for this project, Jess Fabrizio and Vince Lazaruk. They were as interested in learning more about this space as I was.

The first thing DeSotto told me is how “toxic” the building was when they first started doing work. Moldy and dusty, they had to wear a breathing apparatus when stepping inside.

“It was a dark place. There was ‘Death’ written on the walls (and) blood on the walls,” he said.

Death would be the perfect word to describe the Sandbar Tavern, a building decaying for years on a street that is rapidly revitalizing. But the International Village is alive and this adaptive re-use project is both literally and figuratively theatre for the street, with a marvelous new façade rambunctiously acting its way into the spotlight as what will surely be one of Hamilton’s hottest addresses.

The King Street façade features restored brick, new fenestration, a jet-black cornice, a balcony on the second floor, and an accordion style glass front at street level, mirroring the two row buildings sandwiching it and creating continuity. If this were a stage set for the theatre, it’s been painted well.

Next we went for a tour of the space. Hard hats, muddy shoes, and makeshift stairs; DeSotto was not only the tour guide, but also the safety officer.

“We’ve been extracting two garbage bins of drywall and plaster per day, for months now,” he says as we lean over a wood safety balustrade to look at the excavation happening below. 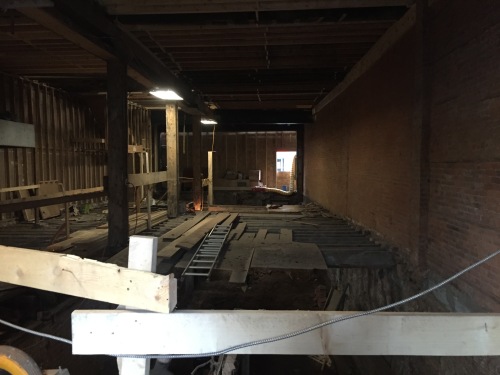 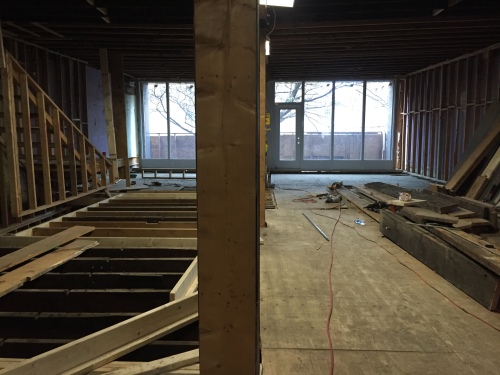 The second and third floor is going to be eleven lofts in total. Exposed brick, unique accents, plenty of windows, and even a balcony are just some of the features for the residents on the second floor. Weaving in and out of wall studs, DeSotto paints a picture of what the finished project will look like. It’s easy to envision when you’re on a tour with someone so enthusiastic about a space. 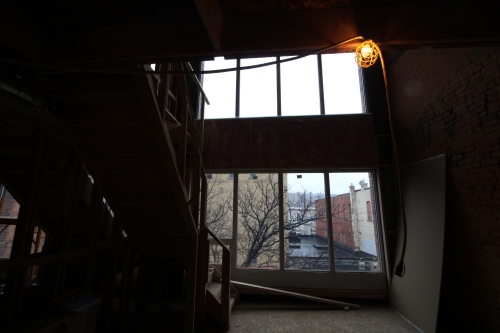 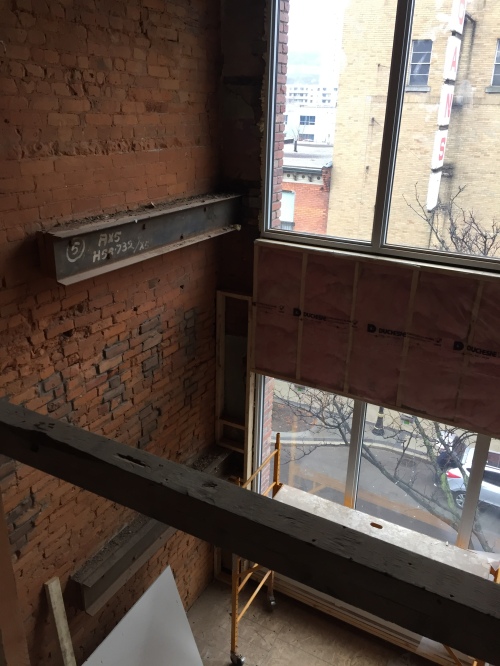 Just getting to the third floor took the balance of a gymnast, but was well worth it. 24-foot ceilings with two levels, glass block windows, I-beams from original signage, exposed columns and ductwork. These spaces will be a harmonious mixture of new and old.

What was a somber day turned into a hopeful day. A building is getting a new life in a tasteful manner. The International Village will get yet another diamond. It’s starting to run out of rough.

I would refer to Peter DeSotto as Shakespeare, and these lofts as Urban Maps Theatre, but the play they’ve written for this building is anything but a tragedy.

Theatre Lofts are slated to be complete by April 2016.