A year after completion, it’s time to take a closer look at 123 James Street North and the impact it’s had on the neighbourhood.

There was much trepidation when Lintack Architects first released the renderings. Will it fit in with the streetscape? Is it what the street needs? Who or what will occupy the building? Isn’t there enough office space available for rent in the core? Is it actually going to be built?

This 32,000 square foot building does mingle well with the streetscape for a few specific reasons. It was designed to meet the datum line of the adjacent buildings, so the height was not an issue. Brick was used to blend with the facades already lining the street and although it’s a larger builders brick, it still bodes well with the surroundings.

Cornices clad in matte black metal mirrors much of the heritage on the street, with a modern take. It may be less ornate, but the idea is there. The cornice cladding could be interpreted as an interaction, or homage, to the black clad façade of it’s neighbour across the street, 118 James Street. 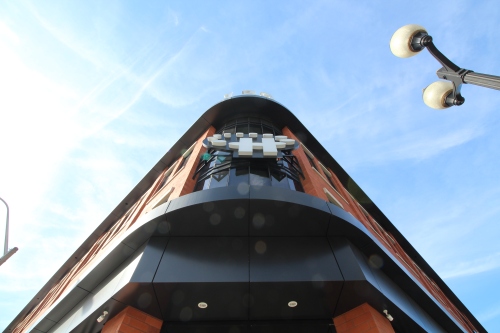 A cylindrical glass corner punctures the sky with big strip mall numbering. This part of the building is often the recipient of some harsh criticism. It reminds some of the Meadowlands, or suburban architecture. One other flaw would have to be the tinted glazing on the upper floors of the building. Less inviting, this glass can give the onlooker a feeling of intimidation. Though the windows are lined with stone lintels and windowsills, which also compliments the heritage characteristics of the street.

A lot of questions were also raised about why the building is only commercial and not a mixed-use development. The programming of this building was clearly designed with what the client, Jack Beume, had in mind. The site required remediation making the option of a residential development much more expensive. Still, the decision to go with a commercial building paid off, as it is nearing capacity and it’s still just an infant. It’s brought jobs and businesses to James Street North.

The Central and Beasley neighbourhoods are two of the least dense neighbourhoods in Ward 2, but the focus of major infill should come from the empty parking lots that are scattered amongst the core. Adaptive-reuse, midrise development, and remedying the parking lot plague are just some of the directions to take in creating a smart, diverse building stock in two of Hamilton’s hottest ‘hoods.

There’s a lot to consider when evaluating the success of a building, especially in it’s infancy. 123 James is an exception. Like it or not, its impact on the street has been positive. And it’s better than a parking lot.