After a long wait, The Brant Street Pier finally opened in June during this year’s Sound of Music Festival on Fathers Day Weekend.

The Pier is the final phase of the Waterfront at Downtown Burlington project. Other phases of the project include the parking garage at 414 Locust Street, Discovery Landing, the Rotary Centennial Pond, and The Dofasco Waterjet Plaza.

Located at the Eastern End of Spencer Smith Park, the Brant Street Pier extends 137 metres over Lake Ontario. The S-shaped pier is connected to the park’s existing promenade by a coloured concrete walkway. 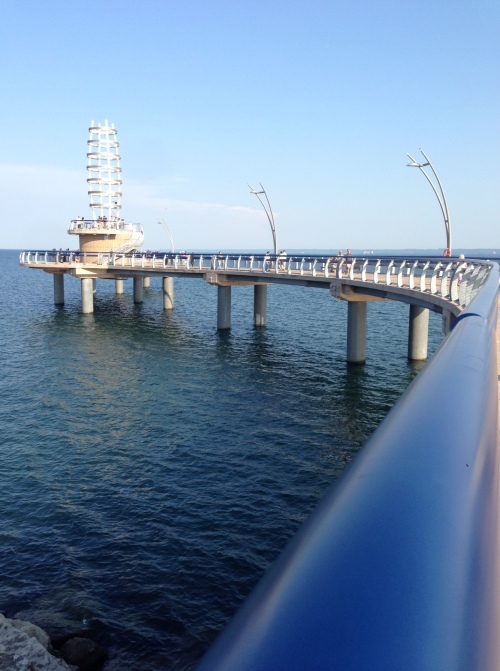 Five metres above the water, the pier’s platform is built on 14 caissons drilled into a bedrock foundation.

Located along the sides of the deck are LED lamps extending over the walkway and benches without backs, offering different views of the lake.

Further out (85 meters), the deck widens for a circular node. In the centre of the node is a raised platform that is nine metres in diameter and can be accessed via circular staircase.

Atop the platform is a 12-metre beacon with an oblong nautical-style structure complemented by rings clad with a perforated metal sheet.

The platform not only supports the beacon, but also offers a different vantage point from the pier.

According to the City of Burlington, the construction of the pier was also attentive to the environment. The height of the pier allows the free flow of the water under the platform. Along the eastern edge of the promenade, the beach has been preserved and the project includes providing fish habitat compensation and enhancements for Sheldon Creek.

The total cost of the pier construction is an estimated $14.4 million.