It was a windy, brisk morning, with scattered flurries. Despite the cold weather, runners came out in droves for the festive event.

All participants who entered the run were given a full Santa suit, including a beard. 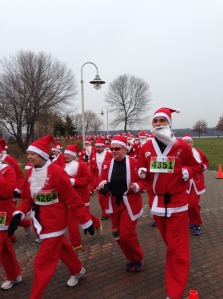 The race started at the Hamilton Yacht Club, went through Pier 4 Park, looped around Bayfront Park, and finished out front of Williams Coffee Pub.

VR PRO, the company that held the event, already has a Santa 5k run in Burlington, Ontario and Burlington, Vermont, before adding a third Santa race in Hamilton.

Kelly Arnott, Race Director for VR PRO, said that despite the cold weather, the run was a success.

Victor Gatundu, who won the 5-kilometre run with a time of 16:50, said the race was fun, but he had some technical difficulties during his run.

“It was a good race. It was very cold and windy out there, my gloves were too thin, and my [Santa] pants exploded during my run!” said Gatundu.

Arnott said all the participants had a great time and next year she expects double the amount of registrants.

“[Hopefully] next year we’ll get one thousand [participants],” she said.