City Hall: Worth A Second Glance 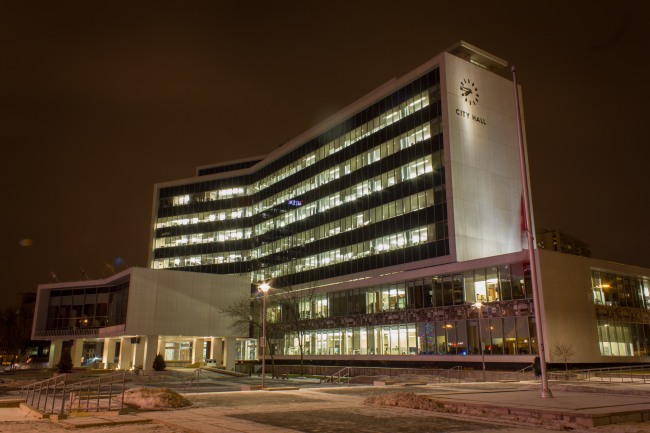 Designed by Stanley Roscoe in the International Style, Hamilton’s City Hall has lived an exciting life. Completed in 1960, the building has, over time, become a definitive piece of architecture in the city. With an emphasis on volume, glass, and space, City Hall is a spearhead structure for modernism in Hamilton.

Situated on Main Street, a one-way arterial road, the building has never received the attention it’s deserved. Much of architecture depends on how it is approached, and City Hall has an unfavourable location when it comes to this concept. Most people just drive right by it, usually too focused on trying to make that next green light.

Walk the grounds of this building and it’s easy to see what’s so alluring about it. The glass curtain wall on the northern façade of the eight-storey office building gleams in the sunshine, offering a feeling of assurance. The East and West sides – once clad in Georgian marble – are composed of white pre-cast concrete and adorned with austere clocks.

The podium it sits on includes a wall frieze of Italian glass tiles that not only gives the building a touch of panache, but a motif that runs right into the interior of the building. While the Council Chambers cantilevers over the forecourt, offering the ever-allusive promise of transparency within it’s geometrically domed roof.

Enter the building and see a style that would make most civic buildings green with envy. Terrazzo floors, wood accents, and a brushed aluminum double staircase greet visitors upon entry. The interplay between solid and space is clean and sleek, almost poetic. 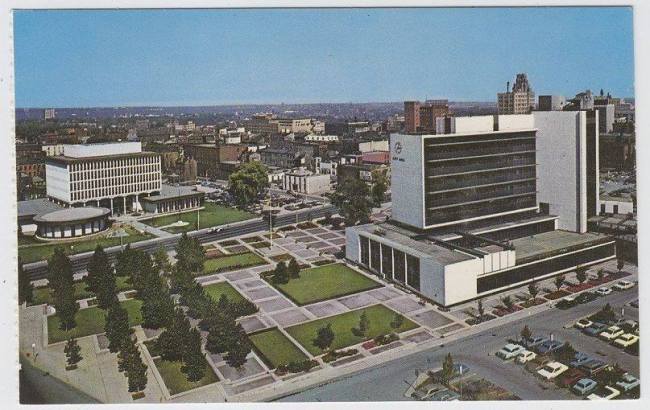 Symmetrical, light, and functional, the building has a worldliness that is vacant amongst most of the city’s building stock. Though City Hall still has its faults (not just in council). The building represents a modern urbanism that is anti-grid, draining Main Street of congestion, with it’s large forecourt, parking lot, and green space. The layout is something right out of Le Corbusier’s manuscript.

In 2005 City Council designated City Hall as a heritage building, with good reason. This underrated, underpublicized piece of civic architecture is a cornerstone building in our ambitious city.

2 responses to “City Hall: Worth A Second Glance”