Dundas’ Carnegie Gallery in the midst of a revitalization 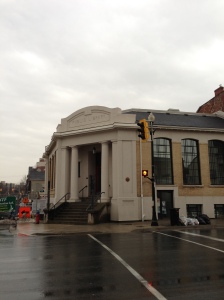 One of the most beloved heritage buildings in Dundas is getting both a facelift and a new addition.

Carnegie Gallery is in the midst of a revitalization project by Dundas-based architects Perkins + Will. The changes being made to the gallery include street level accessibility, a wheelchair accessible washroom, a visitor operable elevator, and some extra gallery wall space, among others.

The street level accessibility will be on Ogilvie Street, via the new addition. This addition will be an atrium, which is superimposed against the southern side of the building. The atrium will feature large floor-to-ceiling windows facing the street and a brick accent that should fit seamlessly with the building’s existing exterior.

The building is a neoclassical (or beaux arts) design, with its tall staircase, portico, doric columns, and half columns.

Originally Carnegie Library, the building first opened its doors on December 8th, 1910. The city was one of 111 cities in Ontario (125 in Canada) to receive a grant of $12 000 USD from the Carnegie Foundation. Pittsburgh steel tycoon Andrew Carnegie created the foundation to promote education. In order to qualify for the grant, a municipality had to be able to provide library maintenance by raising an annual amount of one-tenth the grant, from taxes.

The library stayed open until 1970, when a new municipal library was erected further south on Ogilvie Street. The space was converted into a children’s library that lasted only ten years, after which, it was then leased to the Dundas Art and Craft Association. 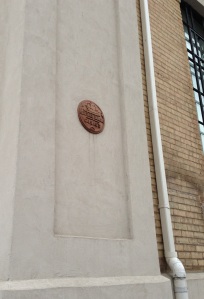 Heritage Plaque on the side of Carnegie Gallery

In 1980, Carnegie Library was designated as a heritage building and was converted into Carnegie Gallery in 1981. The building was later purchased by the City of Hamilton in 2006.

Carnegie Gallery currently exhibits bodies of work by local artists and contains a gallery shop that sells art and other goods.

The Province of Ontario has provided the Dundas Arts Community Foundation with a 1.2 million dollar grant for the Carnegie Library Revitalization project.